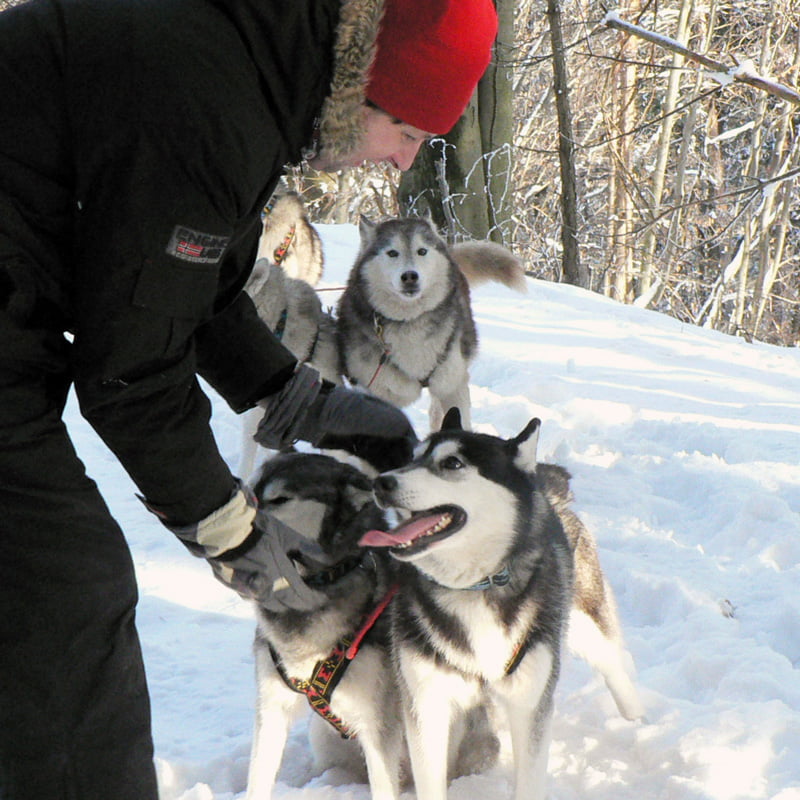 The story of the brand BON APPETIT is closely linked to the personal story of Olivier Schimpf. Since forever, Olivier has been an active sportsman. His ambition and his desire to achieve a certain excellence pushed him to the highest level. An injury put an end to his handball career at the age of 22.

At this time, he decided to take a dog, his first Siberian Husky, to keep a physical activity. He was always fascinated by this breed, that kept his primitive instinct and remains very close to nature. He quickly get a second dog and all his free time is devoted to dog sport as breeder and musher.

As a passionate breeder, he earned in a few years only a world-wide solid reputation and achieved  incredible results in a very short time. His travels with his dogs went throughout Europe and even in the northern hemisphere of the globe. More than 200 championship titles, including International, World and European champions have been earned  by his dogs and dogs from his breeding kennel. 2008 the famous American magazine «Siberian USA»  elected Olivier as «Breeder of the year 2008» , the highest distinction in the breeder world. Some breeders bought his dogs to improve their breeding program, to help their breed’s selection or even to start their own kennel.

In the meantime, Olivier practices sled raid with his dogs, this activity is essential to the breed’s needs. Among the many expeditions one has to be specially underlined : the 2009 expedition without assistance during several weeks in the northern hemisphere  with 14 dogs.

Quality of raw materials and composition
rich in animal proteins

His dogs are real athlets and Olivier understood in a practical and natural way their nutritional needs. But he could not find the quality required on French or even European petfood market. Moreover he was convinced that the quality of raw materials and the composition rich in animal proteins coming from different types of meat are essential factors for the maintenance of good health and achievement of physical goals for his dogs. This approach was quite innovative for the early 90’s and he was not taken seriously by many petfood industrials at this time.

Therefore, from the year 1995, Olivier decided to produce his own recipes, selecting the raw materials, developing food with high percentage of meat and highly digestible while preserving health of the pets.  He found the technical partner who will respect his specifications and produce a new generation of petfood more suitable to the real needs of the pets.

The first range
of animal feed

At this time, petfood production was not the main activity for Olivier as he still worked in industrial automation. First range of petfood from his own brand is sold just under 1 ½ year later, in the first time mainly to breeders and a lot of individuals. Very soon, sales grew throughout European countries and out of Europe, and so petfood became his principal professional activity.

A level of quality
so far rarely reached

Olivier as breeder left a significant mark on the Siberian Husky breeder’s world AND on the petfood market : he combined both to achieve a level of quality so far rarely reached. He makes the difference with high quality petfood containing high percentage of  meat based on a philosophy far away from the profit motive alone.

This website uses cookies to improve your experience while you navigate through the website. Out of these cookies, the cookies that are categorized as necessary are stored on your browser as they are essential for the working of basic functionalities of the website. We also use third-party cookies that help us analyze and understand how you use this website. These cookies will be stored in your browser only with your consent. You also have the option to opt-out of these cookies. But opting out of some of these cookies may have an effect on your browsing experience.
Necessary Always Enabled
Necessary cookies are absolutely essential for the website to function properly. This category only includes cookies that ensures basic functionalities and security features of the website. These cookies do not store any personal information.
Non-necessary
Any cookies that may not be particularly necessary for the website to function and is used specifically to collect user personal data via analytics, ads, other embedded contents are termed as non-necessary cookies. It is mandatory to procure user consent prior to running these cookies on your website.
SAVE & ACCEPT